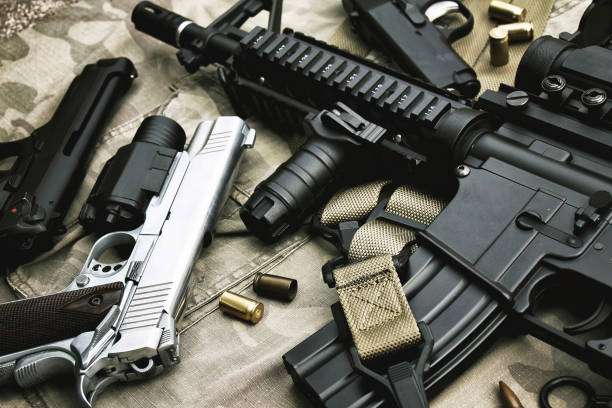 The Difference Between an Electric, Gas, and Spring Airsoft Gun

You could say that sports equipment is what gives us our competitive edge. Whether you run a gun, shoot a bow and arrow, throw a ball, or play a different sport; your equipment gives you the competitive advantage you need to excel in that sport.

There are many different types of airsoft guns, and while you could spend the rest of your life reading about them, it would be a shame to miss out on the experience that you can get by actually firing one! So, before you buy your first airsoft gun, take a few minutes to educate yourself about the various types of airsoft guns available today.

What are Electric airsoft guns

Electric airsoft guns are battery powered. This type of gun has a battery that powers an internal piston. It is spring operated instead of using a manual pump. The battery can be recharged in order to fire continuously. The battery type, the type of action, the selectivity, and the range of the shot all vary among these electric-powered guns.

The original design for the electric gun created by the Japanese company Tokyo Marui made it popularly known as the AEG. Today, the AEGs have evolved into the most complex type of pistols in the world.

When the spring is loaded, it pushes the plunger forward and propels the bullet through the barrel and out of the muzzle. Some manufacturers use this system, but they improve it. The muzzle velocity can be anywhere from 150 to 600 ft/s.

The standard 9-volt and AAAA battery packs are still the most popular choice. They give you the greatest range of play and can be found easily at any store. With these smaller batteries the AEG feels much lighter than it really is.

Toy companies make AEG replicas of their counterparts. Each addition to the replicas brings some improvement in the visual appeal. It’s an affordable and powerful replica, but there is no change in its operation.

Mid-price guns are not good choices for people who want to get into shooting and enjoy target practice at a competitive level.

What are Spring airsoft guns

The spring airsoft guns are single shot devices that use the energy stored in a spring to blow a pellet down the barrel.

The spring-powered airsoft guns are better than the electric guns in terms of power and durability. Stiffer springs make the guns much more powerful, with a muzzle velocity of 400-700 ft/s.

Spring guns are inexpensive, but they’re not long-lasting due to the constant pressure exerted on the gun parts by the powerful spring. They can be easily modified to last longer and shoot powerfully.

The mid-range spring guns are in-between the low-end and high-end guns. They shoot more accurately and have a more powerful muzzle velocity.

They are perfect for short and long-range shooting, and they excel during cold weather. Their key advantage is their use in all weather conditions without relying on batteries or gas.

There are many kinds of rifles, depending upon the purpose of their use. Some are battery operated while some are spring-powered, and a few can be used for hunting or target shooting.

Gun is the primary weapon for many shooters. Spring guns are considered the best due to their reliability, power, and accuracy.

The ease of repair and modification of this guitar are the added advantage.

There are many differences between electric and spring guns. Electric guns are fully automatic and can fire multiple shots at a time. Spring guns are single-action and must be pulled and released manually. Electric guns are considered to be favored by serious airsofters.

Electric Guns are much quicker on shots than spring guns.

Power. Capacity. Price. These are the things that separate the good from the bad when it comes to rifles. Rifles tend to be more precise and more powerful. They’re also capable of holding more rounds at one time. With that being said, they’re more cumbersome and heavier than a pistol.

Pistols are more expensive than rifles, and they take longer to maneuver. However, they are smaller and easier to move with. Thus, they make sense for CQB environments.

Though pistols hold fewer rounds than a rifle, this can be rectified by a high capacity magazine that allows you to stay in the fight for longer. However, depending on the skill of the player, matching a pistol with a rifle would be more than fair.

A pistol will put a pistol user at a disadvantage. Not only does the pistol have better reach, but it holds much more ammunition. Also, pistols shoot at a lower rate of fire than rifles. Even fully automatic pistols are outmatched by rifles because they run out of ammo too fast.

In choosing an electric, gas, or spring powered airsoft gun, understanding the advantages and disadvantages of each type of gun may help you decide which type to buy.

There are two questions that come up when you’re deciding which airsoft gun is right for you. First, “What are you going to use it for?” and second, “What kind of power source does the gun require?

You need to answer the first question before you can answer the other ones, otherwise you might end up choosing the wrong gun.

Airsoft players often have mixed feelings about spring-powered guns. On the one hand, they’re the least effective guns at the airsoft field. On the other hand, they’re lighter than gas and electric guns, making them much easier to handle and shoot.

I’ll be honest; the main reason I bought this is so my husband could play with it. It really does feel like a real gun and the sound and power of it is awesome. The biggest problem I have with these guns is the spring power. They are hard to cock every time you pull the trigger.

A realistic possibility is one where you get shot by guns that don’t have the same limitations as your spring powered gun. Frankly, if you’re ever in such a situation, it will be quite frustrating and unlikely that you would win the encounter.

Moreover, spring-powered airsoft guns tend to shoot at relatively low speeds. These guns generally shoot at 170 to 350 FPS while rifles can reach as high as 500 FPS. This means lower accuracy for spring-powered guns.

The gun uses an internal combustion engine to create power and continues to fire as long as the spring holds out. It’s unlike gas and electric guns who rely upon a battery or gas supply to continue firing.

Gas-powered airsoft guns are the next step up. They tend to fire harder, faster, and more accurately due to their semi-automatic firing style. Green gas, CO2, and other lesser known gas pistols can reach speeds of around 400 FPS while firing.

Air rifles are ideal for a wide range of outdoor activities and situations. This includes archery, hunting, target shooting, plinking, and more. Air rifles come equipped with both CO2 and Nitrogen filled propellors.

You know what’s worse than spending time and money buying gas? It’s spending all that money and time on a car, and then not even being able to drive it for more than a couple of hours.

Electric guns are the most popular airsoft guns for a reason. They’re fast, they’re easy to aim, and they’re powerful.

Airsoft is the latest in the rapidly growing field of combat toys. As opposed to other toys like Nerf and Lazer Tag, Airsoft guns require a steady supply of compressed air and can be played at ranges up to 300 meters.

For more than 60 years, the M16A4 (M16. has been America’s main battle rifle. It fires with an extraordinary rate of accuracy and reliability and has been standard issue for many of our military’s forces around the world.

The prices will vary widely depending on what type of airsoft gun you’re looking for. Check out our full line of airsoft guns by clicking here or click on the product pages below.

There are some airsoft rifles that will set you back more than a thousand dollars, but the more you spend on a particular model, the better it will be. Generally speaking, the cheaper models tend to be less accurate and have shorter barrels, but they’re a lot of fun and can be good practice tools.

You have to figure out what the true cost of a gun is. You’ll have to take into account the upfront costs of purchasing the weapon as well as any recurring costs such as maintenance.

The Importance of Blowback Feature

Blowback is the term for the sound that an airsoft gun makes when it fires. Some players dislike the noise made by a blowback gun. This is not really true if the player shoots carefully.

However, airsoft is played for entertainment purposes, and it is not worth sacrificing your personal joy, so if you like the blowback effect go for it. Most gas guns come with a blowback mechanism, while most AEGs on the market do not.

The problem with airsoft guns that have blowback feature is that you need to clock the slide manually before it slides. That’s unrealistic. There’s no moving slide on the real thing.

In this article, we’ll show you a method of disassembling a pump-action shotgun and how to remove the barrel and stock from a spring-loaded shotgun and, once we’ve done this, we’ll explain how we’ve made the gun’s operating system simple and easy to maintain.